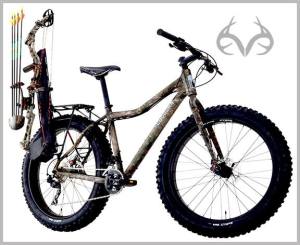 The folks up in Minneapolis at Quality Bicycle Products are always pushing the envelope with new gear. Today they have officially announced the launch of a new bicycle brand called Cogburn Outdoors. QBP already has a great reputation with Salsa, Surly & Foundry and with the addition of Cogburn they’ll be preaching to a new segment of cycling, the active sportsman.

Their first bike from Cogburn is called the CB4 and has the resemblance of a Salsa Mukluk, but it comes with a full camouflage finish and a rack to carry your tool of choice; bow, rifle or fishing rod. I applaud QBP for creating a bike that can leave little or no trace compared to the ATV’s that are typical of most hunters. My only question is how does one pull bambi out of the woods on this bike? Maybe a custom camouflage Burley trailer could do the trick. Below is a video of the introduction of Cogburn Outdoors.